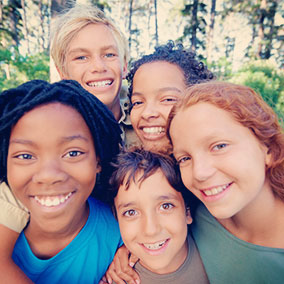 As a mother, my most important mission is my own children. What I did not realize was that it was also possible for me to be a part of God’s love for all humanity, in all of our beautiful, mystifying diversity — in my very own neighborhood. Nor did I ever expect that it would be my children who would lead the way into a wonderful, unexpected friendship.

It started one afternoon as I walked my daughter home from school. “My new friend Sonia celebrates Ramadan!” she cheerfully announced. I knew Ramadan was a month-long fast observed by Muslims, but that was the extent of my knowledge. I wished I had paid more attention in high school World Cultures class.

Until recently, I had also missed the fact that God wants His people to befriend those from outside their borders. In the Old Testament He commands: “When a foreigner resides among you in your land … Love them as yourself, for you were foreigners in Egypt.” (Leviticus 19:33-4) Jesus echoes the same: “Love your neighbor as yourself.” (Mark 12:31)

One afternoon as I waited at the schoolyard, I saw her. Wearing a long robe and hijab, she stood apart, both literally and figuratively. Surely she was Sonia’s mom. I’m naturally an introvert, but after listening to my daughter talk about her new friend for days and hearing repeated requests for a play date, I knew that I must introduce myself. Perhaps it was also the prompting of the Holy Spirit. I took a deep breath and stepped quickly across the schoolyard. I was nervous, but bolder than usual, mostly for my daughter’s sake. I had never met a Muslim. I knew next to nothing about Islam. All I could think was, “God, please help me not to say or do something that will offend her!”

I tapped her on the arm, smiled, and said, “Hi! Are you Sonia’s mom?” Her response was warm and friendly. It was a simple, easy exchange. Those were the first steps into one of the most significant friendships I have ever had. Soon we were spending time together often. I would bring cookies to her house; she would show up at my house with juice and popcorn. The girls would play, and we would talk.

My goals were simply to learn about my new friend and to allow our daughters’ friendship to grow. I humbly admitted that I was ignorant about her culture and religion. In turn, she asked me questions about my culture and religion, and we were able to have a dialogue that was educational for both of us. She told me stories about her country, her immigration, and what it was like for her in America after 9/11.

I experienced Ramadan, sitting with our new friends on hot summer afternoons as they waited for sundown to break their fast. We babysat each other’s children. We shared our lives and learned about each other along the way.

I also began to read and learn more about Islam. Over time, my understanding of God’s great love for Muslims grew. A love stirred inside of me for a culture far different from my own. Just before she moved away, my friend stopped at our house to say goodbye. She seemed surprised at my uncontrollable tears. Perhaps she still did not expect that someone like me could care so much about someone like her.

I used to think that friends had to look the same as me. Now I know that some of the most exciting and worthwhile friendships can be found with “foreigners,” whether their differences are ethnic, religious, or cultural. Is there a family in your neighborhood or at your child’s school who is different than yours? They may be strangers now, but might be great friends in the future. All it takes are a few steps, an outstretched hand, and a smile.