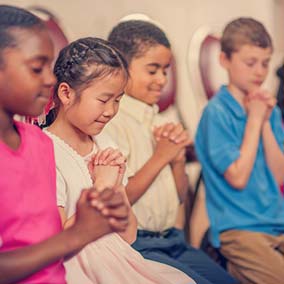 Boys and girls have simple faith that is reflected in their prayers. God used one group of young prayer warriors to set in motion a chain of events that brought sweeping revival to Central Europe, ultimately launching the modern-missionary era.

The year was 1707. The place was Silesia. In this region, now part of modern-day Poland, children took the lead in standing up for religious freedom. They did not use violence or organized protests. Instead, these boys and girls sought God’s help through a prayer uprising. They trusted that He not only heard their requests, but was powerful enough to answer.

Sixty years earlier, leaders of the dominant religion had closed more than 1,000 evangelical churches, forcing pastors and their families into exile. Small groups of believers continued to meet secretly, in spite of laws prohibiting their assembly. “Children would have learned to pray on their parents’ knees.” –“Kinderbeten: The Origin, Unfolding, and Interpretations of the Children’s Prayer Revival” by Eric Jonas Swensson (2010)

Boys and girls in mountain villages gathered for worship and prayer in open fields on the outskirts of town. “The children of Silesia began on their own to assemble in groups outdoors, two to three times a day to pray for freedom of religion and peace in their country. At morning, noon, and late afternoon the children of the community walked quietly two by two to a predetermined meeting place where they would sing a hymn, listen to a chapter of the Bible being read by one of their own, recite some psalms, and fall on their faces in prayer.”–“Kinderbeten: A Tale of Hope and Prayer” by Eric Jonas Swensson (2010)

Adults had mixed reactions. Many parents whose children participated feared retribution from local authorities. “Some tried locking their children in the house, but they would climb out of the windows! Other adults were drawn to the move of God. They would form a circle around the praying children. In some places, the combined number might reach 300 souls. Magistrates brought pressure to bear to disperse these meetings. One bailiff came with a whip, but when he heard the prayers, he could not use it.” –“A Revival in Poland Began with Praying Children” by Trevor Saxby (2017)

Children’s prayer meetings spread to neighboring towns and cities, sparking a wave of revival among evangelical believers. Soon afterwards, Sweden assisted the believers, helping them gain more freedom of worship. A few years later, “The Jesus Church in Teschen had between 5,000 and 10,000 worshipers every week and conducted services in German, Polish and Czech.” –“Prayer and Revival: Yesterday and Today” by Nathan A. Finn (2014)

The revival swept across Moravia, the Czech region of Silesia. Moravian believers escaping persecution founded a community in Germany called Herrnhut. Experiencing their own God-ordained revival in 1727, Moravian adults and children began a continuous prayer meeting that lasted 100 years. God used their prayers for the unreached to launch the modern-missionary era (see Children in God’s Story Part 1).

In the 1700s, God used children to bring about revival among European believers, influence the political situation of their day, and unleash a movement of Goers focused on the unreached. How might God use the prayers of children in your family, church, or region? God is still on the move today and He invites your children to join Him.