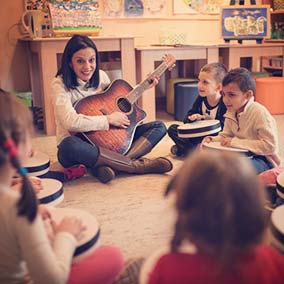 I recently had the joy of meeting Jan, a church planter in Indonesia. She shared of unreached villages that experienced Jesus for the first time, and she explained that she had come to anticipate miraculous stories from her co-workers. It had become common for unreached villages to see God move among them, and Jan was witnessing the movement grow. I was captivated with curiosity. I wanted to know how Jan found herself in the middle of this movement.

As I probed further, I began to see that God miraculously moved in Jan’s own life to bring her into His calling. In fact, He began sowing seeds in her heart through song when she was five years old! Five! Jan proceeded to tell me,

“When I was five, a missionary came to our class and told us stories about the children she worked with. She taught us a simple song, and it stuck in my head like a broken record.  I was totally engrossed with the thought that some kids who looked different than me and spoke a different language loved Jesus too, but that some had never had a chance to hear of God’s love. I remember telling the stories and singing the song to everyone who would listen. I can sing it to this day, almost 60 years later.

After that experience, I especially loved hearing missionary stories. In junior high, my Sunday school teacher took the first Sunday of each month to read us a letter from one of her missionary friends. We would talk about their country and pray for them. It seemed that every month she had an incredible story to tell. She would always close the lesson by having us pray and ask God if He would use us in His mission.  She was honestly one of the most influential people of my childhood!

A couple of years later in high school, a missionary spoke and once again my heart was gripped. I committed my life to be used for Jesus’ glory among the nations. About that same time, I was awakened in the night with a sense of urgency to pray for someone overseas. As I prayed for protection for this person, I got the name ‘Anderson’. About two years later at a youth convention, the speaker was a missionary from India who had only one arm. He described an accident two years earlier where a bulldozer had fallen on top of him while he was building a church. His arm was pinned under the bulldozer, bleeding profusely. No one was around to help so he began to cry out to God. All at once, with a supernatural strength, he was able to lift the bulldozer and pull himself free. He believed it was actually angels that God had sent to his rescue. My heart started beating wildly as I realized this speaker’s name was Jim Anderson. Could it be the same?  Afterwards I shared my experience with him. He hugged me, told me the date of this miraculous rescue, and assured me that God had used my prayers. When I went home, I checked an old calendar where I had jotted down my prayers and there it was … the same date.

The story continued ten years later when my husband and I landed in Indonesia as new, young missionaries. We met with a group of church leaders the day after we arrived. When they learned where we were from, the pastors looked at each other and laughed. Then with a huge hug, they said, ‘we KNOW you will be our friends because our dear friends,  the Andersons, are from the same place!’ It turned out that the Andersons had moved to Indonesia late in life. They befriended and loved the Indonesians in such that they were always welcomed into Indonesian homes. From that time on, my husband and I had immediate favor.

I am confident that God longs to plant seeds in the hearts of children and water them throughout the years, just as He did in my heart.”

I marveled at how God led Jan to her role in His story. He took a seed of song in a five-year-old heart, He watered it, and He grew it to spark a movement among the unreached.

Imagine how God might want to grow the seeds that He is planting in the hearts of your children.