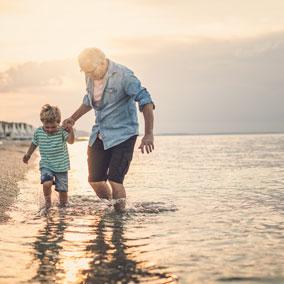 Who is your God? Several times, God identified Himself as “the God of Abraham, Isaac, and Jacob.” Not the God of the sun, moon and stars, the God of mercy, grace, and forgiveness, or the only true God. He was all of those things, but the identity of the nation of Israel was wrapped up in the God of Abraham, Isaac, and Jacob. This revealed two things about our God.  First, He was a God who initiated personal relationships with individual people and secondly, He was a God who chose to accomplish His purposes through families and generations.

When God appeared to Abraham and invited him on a life-altering journey, His purposes were bigger than blessing Abraham and bigger than blessing a nation of his descendants. God’s plan was to bless the world. “I will make you into a great nation and I will bless you; I will make your name great, and you will be a blessing. I will bless those who bless you, and whoever curses you I will curse, and all peoples on earth will be blessed through you.” (Genesis 12:2-3)

God may use small things, but He doesn’t make small plans. Over and over in scripture, those plans were accomplished through families. It began with a couple in a garden, was restarted with the family of Noah, and continued through the family of Abraham. Even in the New Testament we see two sets of brothers in the inner circle of Jesus’ followers and numerous Christ-following families that were used in mighty ways in the early church. God works through families.

As we examine the lives of Abraham, Isaac, and Jacob, a pattern emerges in God’s ways with families.

Who is your God? For our family, He is the God revealed in scripture, but also the God of Gerald, Henry, and Thomas — three generations of men with whom God initiated a relationship in the past that is producing fruit in present generations. Perhaps your name would be the first on such a list. If so, understand that when God intersects your life, His plan is bigger than you. His plan is to work through your relationships and bless the world. Your choices in this generation will influence what is produced in future generations. Keep the big picture in mind. God is on mission to redeem and restore a broken world and He does it one individual, one family at a time.