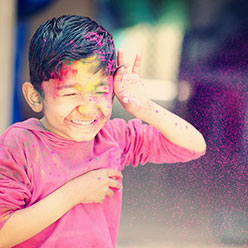 Exploring traditions from other cultures is one way to expand your family’s view of the world and cultivate a heart for the peoples that God loves. Learn about Holi (HOH-lee), an annual holiday celebrated across India and in many other places with large numbers of Indians.

Holi falls in late February or March and means the “festival of spring” or “festival of colors”. Celebrated with friends and family, this multi-day party represents good winning over evil, new beginnings, and springtime’s arrival. This year Holi begins March 19.

A few days before Holi, children begin celebrating by dropping water balloons on unsuspecting people in the street below and firing squirt guns to soak passersby. The night before Holi, crowds gather around huge bonfires built in public places like town squares or parks. Many people perform religious rituals, seeking forgiveness from their Hindu gods and asking that evil would be done away with in the world. Celebrants often sing together around the fire.

The next day, people throw all sorts of powdered colors on each other: hot pinks, bright blues, electric greens, deep purples, and sunny yellows. If you looked down on the city from the sky, you would see clouds of bright, moving, swirling colors. Everyone plays, laughs, and runs around until they are exhausted, soaked, and covered in color. Families then return home, clean up, and eat a special treat called Gujiya (GOO-jee-ah).  With its filling of dairy paste and fruit, this sweet, crescent-shaped dumpling tastes similar to a fruit-filled doughnut. After a snack, families visit relatives and friends in the neighborhood.

Some parts of Holi are really fun. However, behind the joy and fun is something sad and broken. People celebrate the hope of good triumphing over evil and yet, not one Hindu god among the millions they worship has any power to overcome evil. This empty hope continues year after year. The people have not heard about God’s Son, Jesus, who brings victory over all evil and sin.

1.  As a family, participate in a Holi celebration near your home. Often, Indian families do not know the reasons behind their rituals or have a relationship with any of the gods they worship. While you are having fun, ask them honoring questions about where good and evil come from, what gives them hope in their lives, and how evil is defeated in the future. Listen carefully to their responses. When you return home, discuss the festival as a family. What parts of Holi celebrations are good, true, and beautiful? What parts are twisted, false, and broken? What could we do next to reach out to the Indian families we met at Holi?

2.  Create your own explosion of Holi colors.