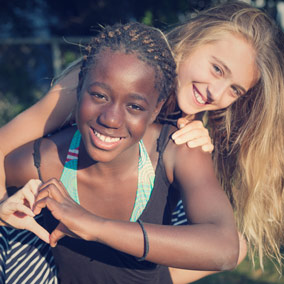 Children have the ability to make friends wherever they go. God used the kindness of an 11-year-old girl to pave the way for a church-planting team to enter a Hindu and Muslim community.

The year was 2001. The place was the island of Trinidad. Eleven-year-old Megan accompanied her dad there on her first mission trip outside of the US. She was thrilled to be in a new country, but not about joining her dad for several days of church-planting seminars. While he trained local believers in a community center, Megan began to explore the surrounding neighborhood which included small shops and a Hindu bar.

After noticing a girl about her age standing on a balcony above the bar, Megan walked across the street and asked the girl if she wanted to play. Megan and her new friend, Keisha, had fun together for the two days her dad trained. Megan learned that Keisha’s family was Hindu and that her father owned the bar. Soon afterwards, Megan and her dad flew back home to the US.

Five weeks later, Megan’s father returned to Trinidad. He learned that although the new church plant was thriving, the team had initially faced opposition. For their grand opening, leaders had planned to show The Jesus Film at the community center in hopes of attracting curious local residents. They arrived to find the doors padlocked. When rumors of a Christian church spread, several Hindus and Muslims had petitioned community leaders. As a result, the Christian church was denied access to the community center. It seemed like the grand opening was not going to happen.

As the church-planting team began to pack up their supplies, the owner of the Hindu bar approached them and asked what was going on. He then made a surprising offer. “Don’t cancel church tonight. I will close half of my bar and you can show the film tonight in my building.” Grateful, but astonished, the team prepared for the grand opening of a Christian church in a Hindu bar!

Later, the pastor of the church-planting team sat down with the bar owner to ask a bewildering question: Why would a Hindu host a Christian church in his bar? Here was the bar owner’s amazing answer: “For many months I watched your team come to the community center. I watched as you met people from this neighborhood. I didn’t believe that what you were doing was a good thing. However, five weeks ago, when a little girl from your group walked across the street and spent two days playing with my daughter, something in my heart changed and I knew that what you were doing was right. Then I resolved to help you in any way I could.”

God can use a child to do the work that an adult might never be able to accomplish. What about the children in your home? How might God work through them to bless the nations?