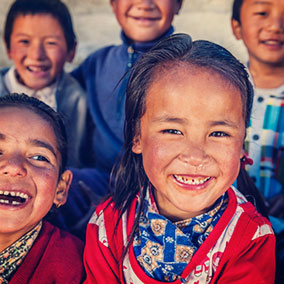 I have always been a big fan of mountains, and few years ago I had an experience that deepened this love even more. While trekking through the Himalayas, I spent a week with a group of boys and girls who opened my eyes to the miraculous ways that God is using children to expand His kingdom. This group of children lived with many challenges. Not only were they orphans, but they were also blind. They had no physical sight and they had no physical father, but they had a vision for their life that came from their Heavenly Father. During the time spent with them, I saw that God is doing big things in this world and He is doing them through small people.

This community of children lives in a remote region of Nepal. In past generations, there were no known followers of Jesus in their culture. No one in the region had ever heard about Jesus. These children are part of the first generation of believers in their people group.

During my time with them, we enjoyed conversations over Nepali tea (black tea with black pepper), and I got a picture of what their lives look like. Every week, these boys and girls trek through the steep and treacherous mountains, being led by the children with at least partial vision in one eye. They share with their unreached neighbors of the joy and life that they have found in Jesus. They have prayed with people and seen them healed, and they have seen the Kingdom of God expand in Nepal. Though they are small children who face major limitations, they are making a big impact.

As we visited other parts of Nepal, I learned that similar things were happening all over the region. Thousands of people from other unreached groups were also coming to Christ. A large part of this movement began with a group of young teenage boys who understood that they were a strategic part of God’s mission to make Himself known where He was not yet known.

These are not isolated stories from a far-off land. God’s call is for all believers, from all nations. God has plans for your children that are larger than life. No limitation is too big for Him. God has delighted in using boys and girls all throughout history, and He still chooses to use them today. What if we lived with the same vision as the children of the Himalayas? Imagine what God could do through your family.