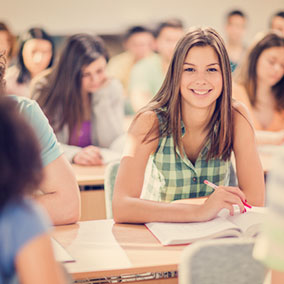 We do not know her name or exactly how old she was, but we do her situation (2 Kings 5). She was captured in a battle between Israel and Syria. Often these young captives were given backbreaking jobs in the fields, but for some reason, she was chosen by Naaman to be his wife’s maid. We can imagine her spending her days sweeping the floors, fetching water, watching the young children, and doing whatever chores she was given.

When Naaman became ill, the girl immediately told her mistress that she should send for the prophet in Samaria. Because the girl knew of the prophet Elisha, we assume she grew up in a Hebrew family who loved God.

And because Naaman’s wife listened to her, I believe this young girl had somehow gained the respect of Naaman’s family, maybe by serving wholeheartedly at whatever job she was given. When she suggested to his wife that he find the prophet, Naaman did so … and was healed.

As a result, this gentile army captain believed in the one, true God. We do not know the total impact that Naaman’s heart-change had on the men under him, but we can guess that it was significant … all because a young girl allowed God to use her faith to influence people far from her own home.

This biblical account reminds me of two other young girls.  Like Naaman’s maid, they grew up in families who loved God. They attended a Bible-believing church where the youth pastor challenged them to live out their faith in their everyday lives.

As the girls entered their third year in a public high school, they prayed they would be a testimony to all around them. They made an effort to be kind to the unlovable, to help fellow-students who struggled with their work, and to be polite and respectful to their teachers. Some of the kids responded to them, some did not; but their science teacher was watching them.

After several months, the teacher’s curiosity got the better of him. He did some investigating and found out which church they attended. He decided to visit the church just one time. Then he went back a second time and a third. Soon he and his family were attending regularly and this teacher’s entire family trusted Christ as Savior.

That is not the end of the story.  As the teacher grew in his faith, he felt the Lord calling him overseas to mission work. With their three young children, the family moved to South America. He taught missionary kids at a Christian high school while the kids’ parents worked on Bible translation.

Like Naaman’s maid, those high school girls and their Christian walk had a far-reaching impact – not only on their science teacher and his family, but also on missionaries, and ultimately, on a group of people without access to God’s word.

Often kids do not realize that living godly lives and intentionally demonstrating the love of Christ to others can affect more people than they could imagine … sometimes even people they will never meet this side of heaven.

As parents, we can remind our sons and daughters that they are not too young to have a big impact for Christ. Encourage them with this verse: “Let no one despise you for your youth, but set the believers an example in speech, in conduct, in love, in faith, in purity” (1 Timothy 4:12). Then give your kids this three-part challenge:

Just as in the days of Naaman’s servant girl, God desires to use the youth of this generation to reveal His glory to unbelievers and bring hope into their situations.