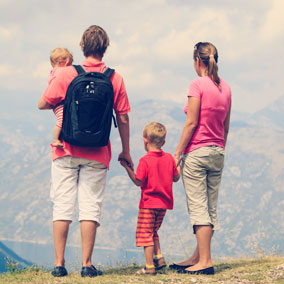 I am a huge fan of spontaneous road trips. In fact, I recently took a day trip to Kansas City. I did not make a lot of plans for this trip (that would not be very spontaneous), but shortly into my drive I remembered an incredible art museum in the city. Since one of the motives for my trip was to inspire fresh creativity, I decided to spend some time in Nelson Atkins Museum of Art.

When I arrived, I realized that there was a special exhibit of paintings from the 19th century Impressionist Era. As an art major, I had come to appreciate this era as one of my favorites in art history. As I walked into that particular gallery, a canvas of intriguing colors caught my eye. From up close, it looked like nothing more than specks of paint thrown randomly onto a canvas. As I backed away for a larger perspective, I realized that I was looking at a famous landscape by one of my favorite artists, Claude Monet!

Monet is famous for his use of pointillism, a technique where the artist monotonously compiles specks of colors into condensed areas. Though they may seem ambiguous from up close, these paintings are remarkable in their entirety. As I stared at Monet’s painting, I knew that I had found the inspiration I’d come for. The Lord reminded me in that moment that He sees things from His perspective that I cannot see from mine.

In the day-to-day monotony of caring for children, there can be times when we wonder if the little things really matter. Whether you are digging cheerios out of every nook and cranny of your home, scrubbing crayon off of the walls, or having to lovingly enforce consistent discipline, take heart! Those small specks are part of a grand picture. Oh, am I grateful for that!

Not only can God see the finished picture, but He has also given us a sneak peak of what it looks like — a picture that John would describe as “a great multitude that no one could count, from every nation, tribe, people, and language, standing before the throne and before the Lamb.” (Revelation 7:9) This is the story that God is painting, and He invites your family to grab a brush.

God has been using multiple generations to accomplish His work throughout all of time. Just think of Abraham and his own family. God said of him, “I have chosen him, so that he will direct his children and his household after him to keep the way of the LORD by doing what is right and just, so that the LORD will bring about for Abraham what he has promised him.” (Genesis 18:19) What exactly did God promise Abraham? God gave him a glimpse of the big picture and promised Abraham that He would use his children to bless all nations! Abraham’s part was to faithfully and consistently disciple his children … who would disciple their children … who would disciple their children.

I can imagine that Abraham had many moments where he felt like the small specks of his life did not matter, but because he knew what the big picture would look like, he had hope. That hope fueled his legacy.

Every small speck of the painting is part of a masterpiece that will last long after you are gone. In what areas is the Lord asking your family to be faithful in the small specks in order to be part of painting the big picture?

A Small Speck in a Big Picture