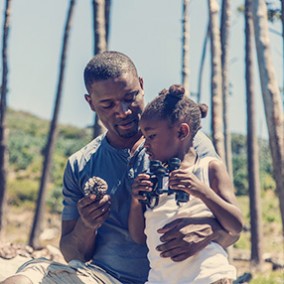 I did not know his name but I remembered his face.

During my first Weave BIG Story training in Ethiopia, he sat just in front of me on my right hand side. He was always dressed in slacks and a button-up shirt, faithfully taking notes through each and every session. He spoke only enough English for a quick conversation, but he did not hesitate to share with me how what he was learning about God’s heart for the nations and the role families have in God’s mission was shifting his paradigms and transforming his heart.

We only spent those two days together in the training and then I was on a plane back to America. I was certain I would never see him again, but would remember him forever. As our plane took off, I looked out my window where the twinkling lights of Ethiopia covered the land like glitter and whispered a prayer of hope over the men and women I had the incredible opportunity to meet and train there.

Fast forward a year later, and there I was, standing in an open field outside our training classroom, face- to-face with the same man. He still wore slacks and a button-up shirt. He still was faithfully taking notes in every session of the additional training we were doing.

As he approached my teammate and me, he politely asked if he could ask us a question. We nodded “yes” and he began to catch us up on all that had happened since we had first met.

This man had returned home and began to teach all he had learned to his family. He began teaching his 10-year old daughter how to pray for the nations and they read together in the pages of Scripture how God promised to draw men from every nation, tribe, and tongue to Himself.

Over time, his daughter began to develop a passion for Muslim people. She shared with her dad how she sensed that God was calling her to one day be a missionary among an unreached people group.

This Ethiopian dad could have responded a lot of ways. I imagine most parents would have patted her on the back, told her how nice that was, and then moved on with life, not giving much credit to a 10-year old girl hearing the voice of God to reach a people who had not yet known Him.

But this dad was different. He viewed his daughter’s life through kingdom priorities and believed she was responding to God’s invitation to join Him in His global story. He and his daughter began praying specifically for Muslim people groups, starting with the ones right within their own country. They studied the Koran and compared it to God’s Word so that she could learn to understand their way of thinking and connect them to God’s truth. Together, they visited a neighborhood mosque where they could learn to interact with local Muslims.

Even though this man was doing everything I’ve spent my adult life teaching parents to do, I stared at him wide-eyed and bewildered.

“What else should I do?” he asked with a deep desire for knowledge filling his eyes, “Is there anything I’m missing?”

Humbled and amazed, I assured him that we should be learning from him. He was doing it right. He was preparing his daughter for a life of incredible significance, regardless of what she eventually grew up to be.

This man believed that God could speak to his daughter. His actions no doubt communicated that to her. He was giving her a vision for how God could use her to accomplish His purposes and (equally important!) actually equipping her to do it. He modeled God’s love for all people in tangible ways.

This little girl will be a world changer in Ethiopia, maybe even to the ends of the earth. I long for the day I can sit beside her and her father in heaven and listen to their stories, to hear the part they played in making our Savior famous among the nations, both individually and as a family.

And after that, maybe I can finally learn his name.