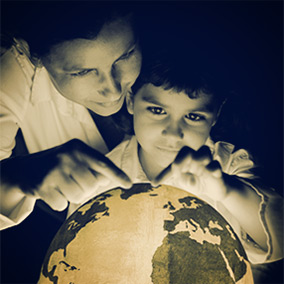 For the most part, my generation lived in a bubble. We lived, we worked, we went to school, we married and we died, all within our bubble. There was nothing wrong with that; it was just the way it was.

To show you how small our bubble was when I was growing up in Missouri, a foreign missionary was someone from Iowa.  We were sheltered, and what little we did know of the world came from quick glimpses here and there.

What I knew about the outside world came from a National Geographic magazine read while sitting in a doctor’s waiting room. There, I saw a picture of a tribe in Africa, where the women wore stacks of rings around their necks and very few clothes.

Then the 1960s came, and the bubble burst. Every home had a television. We watched the news broadcast live from Vietnam each night. We saw, in real time, a president shot and a man walk on the moon. And a nation’s unrest was piped into our homes.

I no longer live in the bubble of my childhood. In fact, someone has shrunk the world. In an ever-changing world, we have two choices as believers: we can either be reactive or proactive. Reactive people are the ones who run out of gas and try to figure out how to get more while sitting on the side of the road. Proactive people are the kinds who know how much gas is in their tank, how many miles it will take them down the road, and that reaching a gas station is within their capability.

We have the same choice when it comes to raising our children. We can look ahead and ask God to give us wisdom about how to prepare our children for a changing world, or we can sit on the side of the road with our broken-down kids, scratching our heads about how to fix them.

I’ve had a number of discussions with my son about my grandson, Titus the Honorable, and the world in which he will grow up. How do I prepare a 19-month-old for the future? I want to share what I’ve already been doing to get ready to hand my grandson his world:

I am not sure what the world will look like when my grandson grows up, but I do know that a knowledge of our world and languages will prepare him for the future. And maybe one of these days, this young man will make a world of difference.