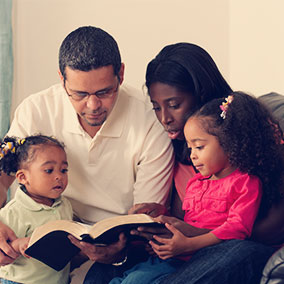 Raising a child with a missional outlook can be a difficult task – a task that takes effort.

When looking for “how-tos,” let’s not forget to look at the Bible itself.  There we find the account of Timothy, a child who grew up with a definitive focus on missions.

Timothy grew up in the town of Lystra, an area in the highlands of what is now Turkey. The town was located on the Persian Royal Road, an ancient highway built in the 5th century B.C. because King Darius wanted a road that would enable travel through his massive empire. Couriers on horseback would travel the 1,677 miles in seven days – an unbelievable feat for the time.

Though we do not know too much about Timothy’s hometown, we do know that the city was a center for education and enlightenment. Even back then – hundreds of years ago – a place seen as a center for enlightenment was probably pushing the social mores of the time. We know that the people in Lystra worshipped many gods and when the Lord used Paul to heal a lame man, the people in Lystra believed that Paul and Barnabas were gods themselves.

Into this culture, Timothy was born to a Jewish mother, Eunice, and a Greek father. We do not read much about Timothy’s dad, but we do know Timothy was not circumcised in the Jewish tradition. Bible scholars think this was a result of the disinterest (or possibly pushback) from his father.

So Timothy was not born into the best of circumstances. He was raised in a society that worshipped a multitude of gods and in a home with a father who was not interested in the God of Israel.

Yet in the middle of this his mother faithfully taught him – with encouragement and support from his grandmother. Paul said Eunice and Lois had sincere faith that they passed on to Timothy (2 Timothy 1:5).

Timothy’s training was based on Old Testament Scripture, what his Jewish mother and grandmother knew. The message of the cross was still comparatively new and had not yet reached Lystra yet. When Paul showed up in the city with the message of Christ, Timothy quickly responded. The foundation had been laid and his heart was ready – probably trusting Christ during Paul’s very first visit to the city.

Paul recognized Timothy’s heritage (2 Timothy 3:15). He also knew that Timothy understood that being a Christ-follower was not easy (2 Timothy 3:10-13). He encouraged and mentored Timothy and Timothy immediately began to live out what he believed.

Apparently some of the older adults did not like someone as young as Timothy teaching and sharing his faith. “Do not let others look down on you because of your age,” Paul told him. “You have a gift. Do not neglect it.” (1 Timothy 4:12-14). Timothy did not.

What can we, as parents, learn from Timothy’s upbringing?

What do our children need from us?

Timothy is a great example of a child who developed a missional heart as a result of being spiritually nurtured at home. Let’s nurture our own kids well – and pray for the same result.