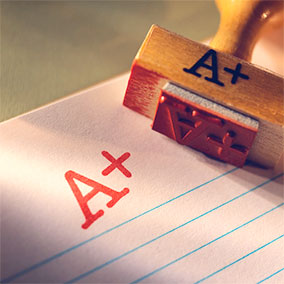 I must confess something: I can’t spel. Growing up, I wasn’t the sharpest crayon in the box. Because I didn’t speak very clearly, everyone assumed I would spend most of my life in the bottom half of the class. I don’t feel too bad about that. Albert Einstein’s parents considered him a slow child, and I’ve read that he didn’t speak very well until he was nine years old. When his parents asked his teachers what profession should they guide him toward, the teachers said it didn’t matter. He would be a failure, no matter what. I like to think neither Albert nor I was slow; we were just late bloomers.

One of the most difficult subjects for me was spelling. Every week, we had the dreaded spelling test. And our little country school had ways of motivating young students. If you made 100 percent on your spelling test, you got a free ticket to the Saturday matinee. To a young boy in rural America, going to the theater was a mystical, magical experience.  I worked hard trying to learn to spell those words, only to get 75 or 80 out of 100 on my paper. I only made it to 100 once that I remember.

Unlike Albert, who said he couldn’t remember much of his childhood, I do remember mine; I just choose not to recall everything. It wasn’t my fault I couldn’t spell. The blame goes to whoever invented the English language. Take the word psychology. There is no reason on Earth for it to start with a “p.” And if it starts with a “p,” then you should pronounce that letter: “p-ssssyychoolooogy.” It even sounds better when you sound out all the letters. I can think of only one reason to throw in extra letters in a word, and that’s to keep a third-grade boy from getting 100 on his spelling test.

One day, I was sitting in class, and the teacher was passing out our graded spelling tests. She handed over mine with a big smile, for on top of the paper was written a bright red “100.”  And attached to it was a ticket to the matinee show, Gulliver’s Travels.

Even though I wasn’t a speller, I was a reader, and I had read Jonathan Swift’s Gulliver’s Travels. That next Saturday, as the lights dimmed, I was drawn into Lemuel Gulliver’s travels as he encountered the strange Lilliputians. His journey took him to exotic places like Brobdingnag, Laputa and even the country of the Houyhnhnms. For the next hour, I was intrigued and curious about each place Gulliver landed.

Looking back, I can see that God had already put a yearning for the world in my heart. As I’ve served God in many different parts of the world, I’m often asked, “What’s your favorite country?” My answer is always the same:  the last one I served in. That heartbeat for the world in a third-grade boy was given by God and confirmed through books, movies and, especially, the Bible.

Even to this day, I’m a terrible speller. The only reason you don’t know it is that I have Spel Check on my computer. I wasn’t designed to win the school spelling bee, but I was designed by the Creator to engage other cultures. While you’re reading this, I’m living in the jungle, sleeping in a hammock under a thatched roof, fighting off mosquitoes and teaching the Bible in an Embera Wounan village. I have a better job than Gulliver.

Isn’t it something that the one time I got a 100 percent on my spelling test was the week Gulliver’s Travels was showing? Mom and Dad, your child is created for something special. You might have a child like Albert who ends up writing the theory of relativity, or you might have child who is a poor speller and ends up writing books and living in the jungle.

It’s never too late to start praying for your children to find what God has for them. Encourage them to dream aloud about their potential. If God can take a poor speller and city boy (we moved into town before I finished elementary school) and make him a writer and an expert at living in remote villages, there’s nothing He can’t do with your children.

I wonder how my life would have turned out if the movie that week had been Pinocchio.