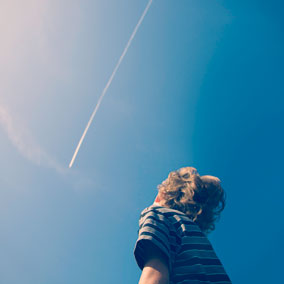 As a kid, I dreamed of owning a flying car. While I am not quite sure those existed when I was a child, they definitely existed in my imagination. As I would watch planes fly by, my grandpa would always tell me, “I bet when you are old enough to drive, cars will fly!” I would always spout back in doubt, “No way! That is impossible! Cars could never fly!”

As it turns out, I was wrong. What was once a  crazy idea in generations past is becoming a reality in this season, and many prototypes have been developed. In fact, due to new materials, advanced technology, and shifting regulations, the flying car could be making its way to the runway in my lifetime. Throughout incredible advancements and innovative methods, the purpose has remained the same: transportation.

As I consider the stories of the Bible, I see many examples of how God used seemingly impossible methods to accomplish His never-changing purposes. Just think of the destruction of Jericho’s walls. God literally told Joshua to march people around a wall seven times, then blow a trumpet. This act of obedience somehow blew down the walls, and God’s glory was made known. Then there was Gideon. Again, God developed a plan for three hundred men to win a battle by smashing jars. Even more glorious, God then used a virgin birth to establish a new covenant with mankind. In all of these “impossible” things, God’s purposes have prevailed and His glory has been revealed to His people and to peoples who do not yet know Him.

After considering examples from history, I cannot help but think that the “new thing” God is doing in the coming generation might look unexplainable and even impossible. In generations past, many believers viewed bringing the gospel to “unreached people groups” as a distant idea. In this generation, our children share classrooms and playgrounds with them. God has scattered unreached peoples all over the world and positioned them in places where they can hear about and know Him. He has established the appointed times for each generation, and He chose today’s children to live in the times of globalization.

I believe that there are big ideas in their little minds, innovative ideas that will bring the unreached into the glory of God. As parents and children’s leaders, we have the privilege of helping our children explore the passions that God has placed within them. We can encourage, foster, and give them opportunities to leverage their great ideas towards God’s age-old, never-changing purpose. This is not always an easy task, of course. Sometimes the dreams and methods that God is stirring in their hearts might seem impossible and strange … but then again, so did flying cars.