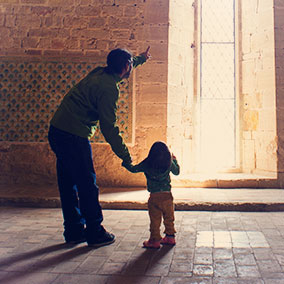 An eager participant chose a front-row seat for the Big Story training. Over the next three days, the truths he learned about God’s heart for the nations and the role of families in God’s mission began to transform his heart and shift his paradigms.

Returning home, this Ethiopian husband and father began to pass on all he had learned to his family, including his 10-year-old daughter. Together, they read in the pages of Scripture how God promises to draw men from every nation, tribe, and tongue to Himself. They started to pray for the nations on a regular basis.

Over time, his daughter began to develop a passion for Muslims. She shared with her dad that she sensed God was calling her to one day be a cross-cultural worker among an unreached people group.  He could have responded in a lot of ways. Most parents would have patted her on the back, told her how nice that was, and then moved on with life. Many would not give much credit to a child’s hearing the voice of God asking her to reach peoples who did not yet known Him.

But this dad was different. He viewed his daughter’s life through kingdom priorities and believed she was responding to God’s invitation to join Him in His global story. He and his daughter began praying specifically for Muslim people groups, starting with the ones right within their own country. They studied the Muslim holy book (Koran) and compared it to the Bible so that she could know how to best connect Muslims to God’s truth. Together, they visited a neighborhood mosque where they could interact with local Muslims. He taught his daughter how to share her faith with unbelievers around her and modeled God’s love for all people in tangible ways.

This dad not only cast a vision for how God could use his daughter to accomplish His purposes, but he actually equipped her to do so. No doubt this girl will be a world changer within Ethiopia, maybe even to the ends of the earth. This account is one example of what the future holds for children who are raised in a family that prioritizes making Jesus famous among the nations. Could you become this dad … this mom … this grandparent?