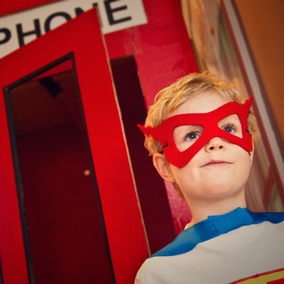 The warm California sun leaked through the windows. A dozen squirmy young children sat on the floor in front of me, with skinned knees from failed bike riding attempts and sun-kissed cheeks from hours of outdoor play.

They listened with wide-eyed anticipation as I told the story of a small river rock who dreamed of one day being used by God, now swinging round and round in a sling, heading straight toward the head of a nine-foot-tall Philistine giant. As I roared and swung my arms and told this great story of a young boy and little rock who helped make God’s name known among the nations, I saw him. With his long black hair falling over his eyes, he sat away from the group leaning against the sink cupboard, doubt etched across his young face.

I watched him carefully as I continued to teach. While his friends were shouting with joy and standing up on their knees in excitement, Seth stayed there, unmoved. The heaviness in his shoulders gave the image of physical weights bearing upon his soul.

“Just like God used David, God can use each of you,” I shared. “Not even a little river rock is too small for God. He wants to use you to share His love with your friends and your neighbors, even to use you in sending His love to people who do not know about Him all around the world. Do you believe that?”

“YES!” the group shouted back in unison.

Seth still didn’t respond. He didn’t even look up.

“Seth, do you believe God can use you?” I asked him gently.

My heart shattered in that moment, in a way that forever impacted my life to come. What could have happened to make a 6-year-old boy doubt his worth and ability at such a young age? To already believe he was so limited?

I wonder how many of the children in our homes, in our classrooms, believe the same thing. Not because we’ve intentionally sought to destroy their dreams and diminish their worth, but because we’ve never inspired them to believe otherwise.

Children have a specific role to play in this season of history, during this stage of their lives. In Scripture, we see God choosing to use children like young Samuel and Naaman’s servant girl. We see this truth reflected in mission’s history as well.

The words we speak, the stories we tell, all communicate something to our children. As parents and teachers, we can choose to use words that give our children a great vision of how they can join with God in His great story. It might be by doing something simple, like the small boy who shared his lunch with Jesus in John 6. Or God could use them in such a great way that it literally changes a nation, like 8-year- old King Josiah in 2 Kings 22.

Do you see your children as agents of ministry who God has created and empowered to serve Him in unique ways? Is this the heart and vision you have for the boys and girls in your home? You class? Your church?

God has designed children to be active characters in His story. He has a role for them that only they can fulfill.  It’s our job inspire and equip them to step into it.