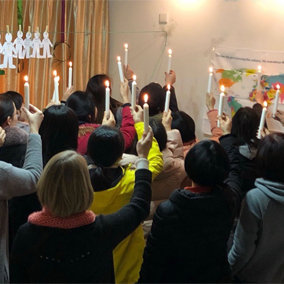 Mobilizing families to join with God in His mission to bless all nations can often feel like planting seeds. But sometimes it is more about fanning sparks.

In a training room charged with excitement, sat Sarah*. Little did this young mother know how God would use the Big Story Training to enlarge her vision for her family and encourage her to step into the global purposes that God had for them. God’s call on her life to go to the unreached was not something new. She and her husband had already heard and answered God’s call, and they were making plans to move to a specific unreached people group in the northwest region of their country.

Sarah and her husband were parenting two young boys under the age of five, and while her husband was excited about the opportunity to uproot the family’s lives and move to a totally new culture, Sarah was apprehensive. She felt overwhelmed with taking care of her children, and did not understand why God would call her to the unreached in this particular season of life.

Sarah felt that motherhood had quenched the flame in her heart to go to the unreached. How could she and her husband go when they were busy with the everyday tasks of parenthood? As Sarah contemplated this call, the trainers held up two candles that would change Sarah’s perspective … two candles that would reveal to Sarah exactly why God had called them to the unreached in this particular season of life.

While showing the group one partially-used, short candle and one tall candle, the trainers posed a question–which candle would you buy if the electricity went out? Without hesitation, the group chose the tall candle. Participants knew that even though it was more costly, the taller candle would burn longer in the darkness. The trainers explained that both candles represented people who understood God’s mission and could burn as lights for Jesus in a dark world.

Sarah identified with the short candle which represented someone who began to understand his part in God’s mission as an adult. She knew that though she could still shine God’s light to the nations, she did not have as much time as those represented by the tall candle–people who began to understand their part in God’s mission as children. Sarah realized that her young sons had their whole lives ahead of them to join God in blessing the nations. They could be a light in the darkness, and they did not have to wait until they were older to begin.

Sarah finally understood that God’s call to go to the unreached was not for her and her husband only, but for their whole family. Her children had a part to play in God’s story and the call to share with the nations was for them, too. Being a parent did not have to quench the spark that God had placed in Sarah’s heart for the unreached, but instead, intentional parenting could fan that desire into a flame that fueled the love of God for the nations in the hearts of her children as well.