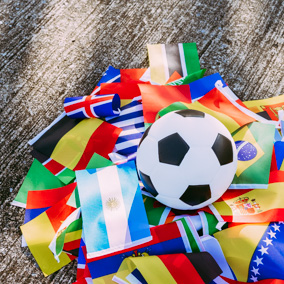 What’s bigger than the Super Bowl or the Olympic games? The world’s largest sporting event, the FIFA World Cup, begins today. For the next three weeks, football (soccer in the US) fans will cheer on their favorites from among the 32 qualifying countries. As families, we can leverage this global event to learn about and pray for the world.

Qatar (KUH-ter or kuh-TAR), a small country on a peninsula between Saudi Arabia and the Persian Gulf, has been preparing to host the World Cup for several years. They’ve improved their existing stadium and built seven brand new ones, all equipped with air conditioning. Qatar anticipates 5 million visitors for this international sporting event.

How does a team get to the World Cup, or any championship tournament? They need three things: a great coach, great players, and a great game plan. Even with these, World Cup coaches and players won’t know who wins until the last minutes of the final game on December 18.

It’s not only World Cup athletes who are moving towards a goal. In these final days, our world is moving towards a goal, an end that God has planned. God is working out his mission to draw the nations to himself in worship. Satan leads the opposition, fighting against everything that God is doing to redeem sinful people and bring them into his family. Unlike human coaches, God knows exactly how his story will end. God wins!!

God shares this ending with us in his playbook, the Bible. He gives us a preview of heaven and who will be there. This week, read and discuss Revelation 5:9 with your family. Revelation 5:9 tells us that through his death on the cross, Jesus purchased for God those from every tribe, language, people, and nation. God desires worship from all peoples and he will accomplish his mission.

If God is like a coach, and the Bible reveals his global game plan, then who are the players on God’s team? God invites anyone who is a follower of Jesus to get in the game. We don’t have to be cross-cultural workers or church leaders to play on God’s team. Everyday families just like ours have a place on God’s team roster. God’s mission is huge and he doesn’t want anyone sitting on the sidelines. Let’s get in the game.

We can participate in God’s mission by praying for people groups who cannot yet respond to God in worship because they don’t have any way of learning about him. Here are two ways to pray during the World Cup.