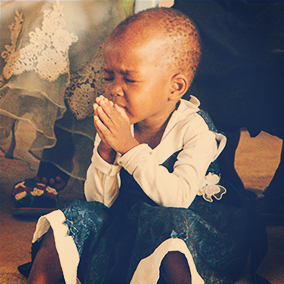 Boys and girls have simple, but strong faith that is reflected in their prayers. God used an unlikely group of young prayer warriors to encourage a missionary doctor and demonstrate that nothing is beyond the scope of what He can do.

The year was 1957. The place was Zaire (Democratic Republic of the Congo). Helen Roseveare, a missionary doctor, served at a clinic and trained nurses. One day a mother died while giving birth, leaving behind a premature baby and a two-year-old daughter. In this remote area without incubators or electricity, premature babies were wrapped in blankets and placed in a box with a hot water bottle. However, as the student nurse poured hot water into the rubber bottle, it burst. “That was our very last one!” she exclaimed. Without continual warmth, the tiny baby was in danger of dying.

At noon each day, Dr. Helen met with children from a nearby orphanage for prayer. She usually gave them ideas of things to pray about. In simple words, Dr. Helen shared about the tiny baby, the lack of a water bottle to keep it warm, and the two-year-old sister who was crying because she missed her mother.

Ten-year-old Ruth responded with this prayer: “Please, God send us a water bottle. It will be no good tomorrow, God, the baby will be dead; so, please send it this afternoon.” Then she added, “And while You are about it, would You please send a doll for the little girl so she’ll know You really love her?”

Dr. Helen paused. Could she honestly say “amen” to such a prayer? God could do anything, but surely there were limits to what He would do. In the four years she had lived in Africa, Dr. Helen had never received a package from her home in England. If someone ever did send a package, who would think to put a hot water bottle inside?

Later that afternoon, Dr. Helen received a message that a large package had been delivered to her home. After calling the children to join her on the front porch, she opened the box. As many pairs of eyes watched expectantly, Dr. Helen pulled out clothing, bandages, dried fruit, and then … a new rubber, hot water bottle! Dr. Helen began to cry. She had not asked God to send it, but in front of her sat a group of children who had truly believed that He would.

Ruth rushed forward, crying out, “If God has sent the bottle, He must have sent the dolly, too!” After rummaging around in the box, Ruth pulled out a small, beautifully dressed doll. She had never doubted that God would answer her prayer. Looking up at Dr. Helen, she asked, “Can I go with you, and give this dolly to that little girl, so she’ll know that Jesus really loves her?”

The package had traveled by cargo ship from England to Zaire. It was packed by Dr. Helen’s former Sunday School class, whose leader had obeyed God’s prompting to send a hot water bottle to Africa. One of the girls had put in a doll for an African child …  five months earlier in answer to the believing prayer of a ten-year-old to bring it “this afternoon!”

God answered a young girl’s prayer of faith in a very specific way. What about the children in your home? How might you involve them in praying over seemingly impossible situations in our world today, including millions who have no access to the good news of Jesus?