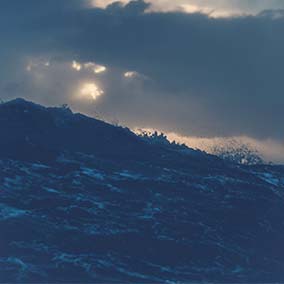 Note to Parents: God is at work among refugees from unreached people groups, often leading them to settle in areas where they will have the opportunity to hear and respond to the gospel message. This is a true story of how one man in search of a better life for his family found eternal life in Jesus. Read it together with your family.

The chilly water reached up to Eshan’s* chest. He and a few other men stood near the shore of the Aegean Sea, attempting to launch an inflatable boat off the coast of western Turkey. At 3:30 in the morning Eshan was hauled aboard the boat with 45 others, including his family.

In the darkness, they set off for the islands of Greece less than 16 kilometers (10 miles) away. All on board were seeking a new life in central Europe, but Eshan was seeking something more. He was no longer satisfied with Islam, the religion practiced by his family and most people in his home country of Turkey. Eshan still believed a Creator existed, but did not know his name.

Shortly into the sea journey, a violent storm rose up. Many aboard were terrified, fearing that the small boat would be swamped by the waves and capsize. In a moment of desperation, Eshan prayed with all his might to the unknown God. He asked the Creator to lessen the wind and waves and save his family from drowning.To his great surprise, the winds suddenly died down and the waves remained calm for the rest of the journey, allowing their boat to land safely on the Greek island of Kos.

Six weeks later, Eshan and his family visited a Christian church in their new city where they received food, clothing, and other items they would need to begin their life in Europe. They stayed at the church to watch the JESUS film, a movie about the life of Jesus shown in their own Turkish language. During one scene where Jesus calmed a storm on the Sea of Galilee to save everyone on a small boat, Eshan was overcome with emotion. He began to weep as he watched God’s Son, Jesus, calm the waters with His mighty power. Eshan realized he had found the Creator God of the universe, the One who had power over the wind and the waves. His name was Jesus! Jesus was the one who had saved everyone on the inflatable boat during the storm.

After this, Eshan and his family began attending a church filled with other refugees like themselves who had watched the JESUS film and were eager to join God’s family of believers. Eshan left his home in Turkey in hopes of finding a better life in Europe. On the way, He encountered Jesus, the God of the universe. Now Eshan has joy in his heart and the hope of eternal life with Him.